It’s been two years since the federal Tax Cuts and Jobs Act created the Qualified Opportunity Zone (QOZ) program to incentivize long-term investments near economically distressed, low-income areas across the U.S. With approximately 35 million Americans living in neighborhoods designated as QOZs, it’s no surprise that multifamily makes up the largest supply of real estate assets located in these zones. 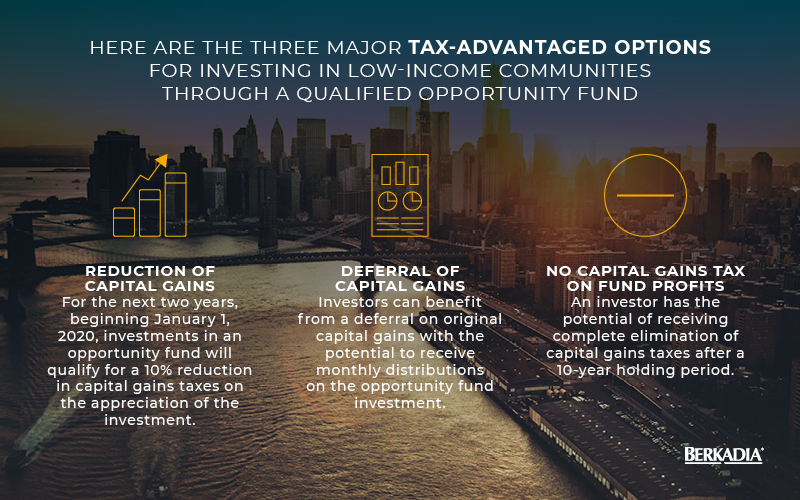 According to analysis by the Economic Innovation Group,  there’s potentially as much as $6 trillion in unrealized capital gains available and eligible to be deployed into QOZs. We expect the potential for tremendous tax savings to serve as a clear enticement for investors.

With many QOZs based in or adjacent to growing neighborhoods, secondary or tertiary markets like Oklahoma City and Reno have attracted a flurry of multifamily investment activity in the OZ space. Given the wealth of potential in the apartment market, here are five promising, high-growth markets we expect opportunity zone multifamily investors to target this year: 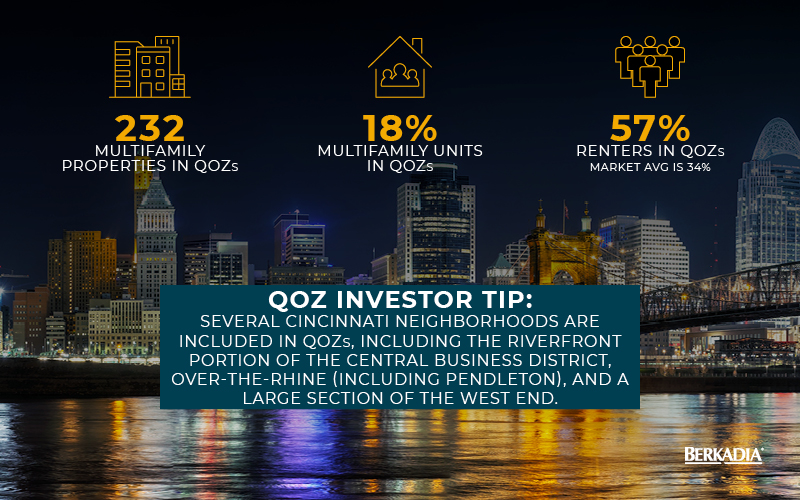 KNOW THE MARKET. Greater Cincinnati has one of the best IT sectors in the nation, rivaling those of metro Boston and the Silicon Valley region. The area is also one of the top financial centers in the nation. Key companies include the headquarters for Fifth Third Bancorp and the regional headquarters of U.S. Bank. Construction is underway on the Uptown Innovation Corridor, a $2.5 billion mixed-use development creating more than 1 million square feet of new office space, hotels, retail, and residential units. 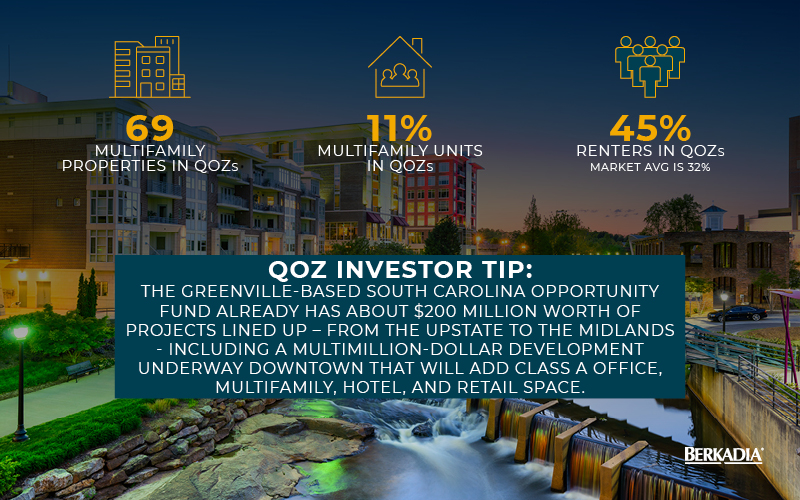 KNOW THE MARKET. The Greenville metro area, also known as The Upstate, is in scenic northwest South Carolina. Over the past few decades, favorable wages, strong population growth, and tax benefits have attracted domestic and foreign companies to invest heavily in the area. Greater Greenville is home to more than 250 international firms and boasts the highest international investment per capita in the nation. The metro is also home to Clemson University, one of the highest-ranked public universities in the country. 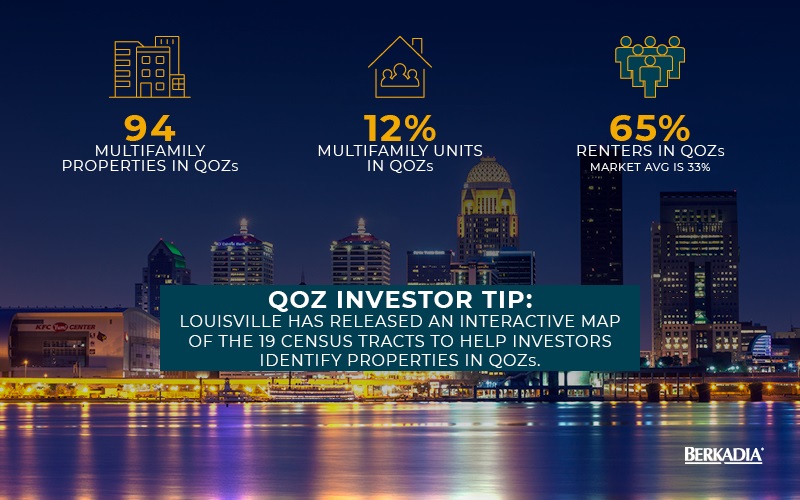 KNOW THE MARKET. Boasting a combination of economical housing options and a growing economy that continues to attract new residents, metro Louisville was among the top-20 destinations for millennials in recent years. Businesses added 12,600 jobs last year, a 1.9% annual gain. To meet the housing demand, multifamily developers will push a significant amount of new product into the market, 10,750 deliveries, or a 10.9% inventory expansion over the next five years. This interactive city map identifies QOZ properties and boundaries across the Louisville metro. 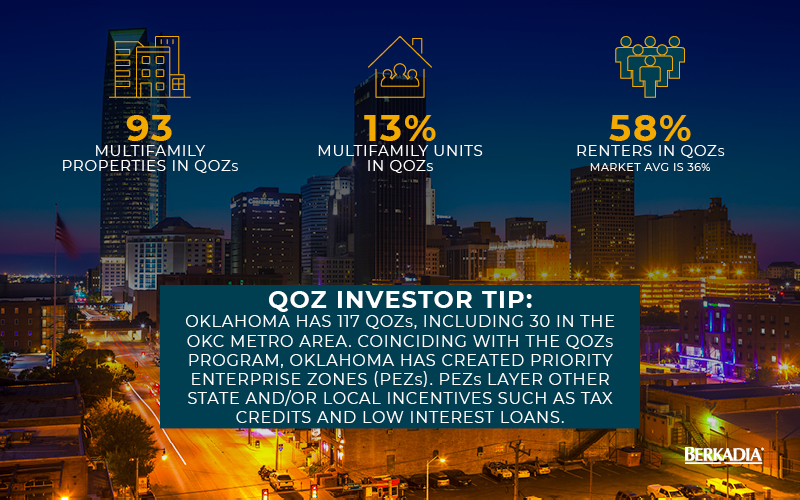 KNOW THE MARKET. One of the nation’s largest economic revivals is underway in Downtown Oklahoma City and the Central Business District. More than $3 billion of development has taken place in these areas during the past decade, and an additional $1 billion is invested in current developments. Fears of an overbuilt multifamily market in OKC have subsided as the average occupancy rate has soared past the five-year average. 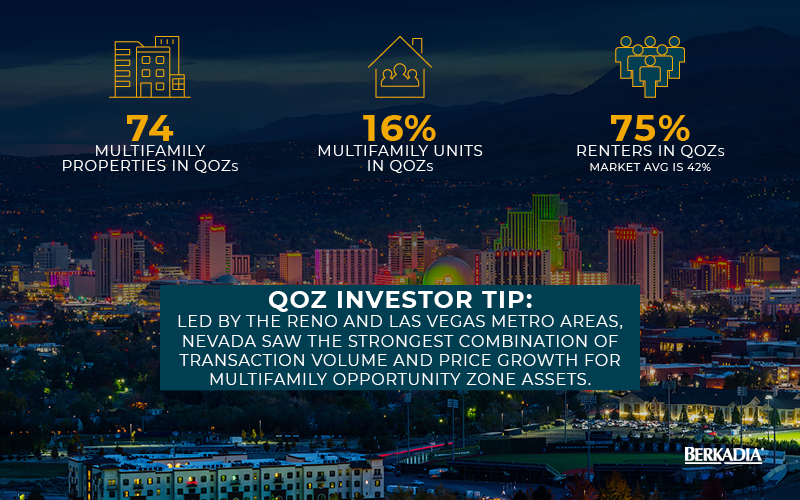 KNOW THE MARKET. Although gaming and recreational activities represent a significant portion of the growing economy, Reno is experiencing diversification of its economic base. Apple, Amazon, and Google are among the many companies investing heavily in data and logistics facilities in the vast Tahoe-Reno Industrial Center. Tesla’s Gigafactory is up and running.

Multifamily real estate offers an excellent vehicle for opportunity zone investors. Berkadia is the perfect partner for investors wanting to learn the full scope of what opportunity zones have to offer.